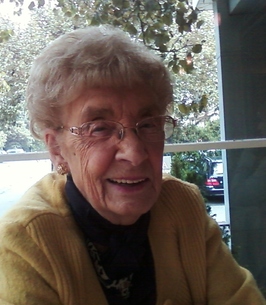 Edna Frances Panbakker (nee Gibney) passed away Friday, September 16, 2022 after a brief illness. Edna was preceded in death by her beloved husband Peter and son Peter Jr., parents Edna and Edward Gibney, sisters Anna Mary, Margaret, Joan, and brother Edward. She is survived by her daughter Suzanne Cetrullo, son-in-law Jim, granddaughters Megan and husband Mike Stoddard, and Vanessa Dorman. She is also survived by her adored godson, Edward Holzli, and many nieces and nephews.

Edna was born into an Irish family on January 12, 1926 in Jersey City, NJ. She was one of five children, the oldest daughter. Her mother was the head operator at the telephone company, and her father was a driver for a trucking company. Her grandparents Mary and Edward Murphy lived nearby, and were always watching the children while their mother worked. She had so many wonderful stories to tell about growing up in a large Irish Catholic family. Everyone was so loved.

Her parents were able to buy a small house down the shore, and all the relatives would descend upon this simple home and enjoy the summers. An outhouse in the back was replaced in later years by a beautiful bathroom, but in the early days, their needs were simple and it gave everyone a respite from the summers in the city.

She met a charming Dutchman at the local roller skating rink and fell in love with him while she was still in high school. They wanted to get married before he went on active duty during WWII, but her parents told her she had to wait until she was 19. She and Peter got married April 1, 1945, and of course nine months later, Peter Jr. arrived in 1946.

She was a young mother, and with her husband in the army, she walked to her mother's every day to see the family and show off her new baby. Peter Jr. was the first grandchild and very much doted on. Her brother Edward and wife Glen soon followed with more grandchildren: Pamela, Lynne, Edward and Monica. Sister Anna Mae and husband Arthur Nash added two daughters to the mix: Janet and Barbara. Her youngest sister Joan and husband John Holzli, followed, surpassing everyone with six children: John Jr., Edward, Sean, Kevin, Heather and Michael.

While Peter and Edna were in their first apartment with their newborn son, she decided she needed some time out of the home, so she applied for a receptionist job at the Arthur Murray Dance Studio, thinking she could earn a little extra money in the evenings. They asked her if she could dance, and she said yes, so they immediately hired her to teach dance classes in the evenings. She went through a brief training, and then she was teaching people to foxtrot and rumba. We have teased her quite a bit about this, as she was not able to teach her own husband how to dance. He tried his best, though!

Edna and Peter bought their first house in Glen Rock, NJ in 1952. Before Suzanne was born in 1954, Edna and Peter were neighbors of an artist who lived next door and was employed as a set designer in NYC. One day during the winter, someone knocked on Edna and Peter's door, looking for their next door neighbor. As the man and woman were wearing sandals and it was snowy and cold outside, Peter invited them in. They were hungry, so Edna made them sandwiches while they waited for the neighbor. This couple was none other than Jackson Pollock and his wife, Lee Krasner. This story did not come to light until almost 50 years later, when Peter happened to mention it to Suzanne and Jim. This story caused quite a stir, as Edna and Peter did not seem to understand the significance of this artist eating sandwiches at their house.

Anna Mae and Arty bought a house around the corner, so Edna saw her almost every day. Both were housewives, so their days were filled with taking care of their husbands, children, bridge games, bowling, and mahjong. In later years, the four of them enjoyed golfing together in Myrtle Beach, SC.

Peter started his working career at a young age as a secretary at Colgate-Palmolive Company, before he went into the Army. Upon discharge, he returned to Colgate and subsequently worked for them for 46 years. In 1966 he was asked to relocate to Mexico City, Mexico for a two year stay to assist their Mexico City office. One can only imagine Edna's dismay at leaving her family and migrating to a place with a foreign language, but she did it. Five years later, Peter was transferred to Milan, Italy for one year in 1971. It was a very enjoyable time with the ability to visit other countries easily on the weekends, as well as enjoying great food and new friends. She never embraced Mexican food, but European food was a different story! It was not spicy!

In 1972, Peter, Edna & Suzanne moved back to NJ, where they settled in Haworth. For the next fifteen years, Edna spent time with her family, made new friends, and became active in the Women's Club. Also during this time, their son, Peter Jr. was in a fatal car accident in 1980. Exactly one year later, her first granddaughter and namesake Megan Frances was born, and the joy of grand mothering became her focus. Once Peter retired, they both started attending First Congregational United Church of Christ, because of course, for Peter, coffee hour was the best! Edna was a steadfast Catholic; however she could not resist the charm and loving fellowship of this church, so she became an honorary member. They both were active in the Seniors Group in Haworth, and went on quite a few cruises in Europe during this time. Eventually they started going on bus tours throughout the Eastern US, toured Alaska, and the West. They also bought a condo in Myrtle Beach and enjoyed that for several years, until Edna fell off her bicycle and broke her hip. That was the end of golfing for Edna.

She was so active at church bake sales, rummage sales, Friday Lunch Bunch (referred to as Knits & Dits by Peter). She went to the Friday Lunch Bunch for years, always arriving early to decorate the tables with tablecloths, paper plates, napkins, and flowers. It was her joy. The church ladies were always working on crocheting blankets for the needy, cutting coupons, and taking turns with desserts. In later years, Suzanne eventually got to be part of the group when she would visit, and fell in love with each one of the regulars at the table: Mary Lou, Dorothy, Jan, Jen, Carol, Andrea, and sometimes Lee.

The Women's Club of Haworth was the ultimate fulfillment for Edna. She was extremely active and thrived on all of the departments the club offered. She loved to host groups at her home, and was even President of her club for one year. She was very proud of stepping up to do a difficult job.

Many years after being widowed, Edna made the difficult decision to move to Houston once she'd had her fill of too many holidays alone. It would give her an opportunity to see her granddaughters more often, as well as Suzanne and Jim. She moved to Houston in January 2020, two weeks before the pandemic shutdown. She had a beautiful apartment in Independent Living at the Village of River Oaks. It was fortuitous that she made it to Houston before the shutdown as it would have been able impossible for the family to visit her in NJ. With the limitations placed on socialization her family did the best they could, meeting her outside and visiting under a tree at her community, with snacks in tow as well as grand pups. She was a dog lover since childhood. As the pandemic restrictions lifted, she and Suzanne were regular shoppers at Talbot's, always stopping for an outdoor lunch at a local café, followed by cookies and coffee. She also was able to resume getting her hair done once a week, which was considered a necessity and enjoyable experience. In the fall of 2020 she fell and broke her femur, which sent her to a skilled nursing facility at The Hallmark. She miraculously rebounded from that injury. While recovering and afterward she enjoyed her frequent Zoom calls with friends and relatives from New Jersey. Jim would spend every Sunday afternoon with her, playing blackjack, plying her with ice cream, candy, cookies and coffee. It's no wonder she thought he was the "lovely one" and her best friend. She returned to the Village of River Oaks, but now to an apartment in Assisted Living as she needed a bit more care.

Edna fractured her back in the spring of 2021 and again in 2022, and ended up back in skilled nursing at The Hallmark. At this point, Suzanne made the decision to permanently move her to their Assisted Living community after she recovered. The staff in rehab was so kind to her, so a move to The Hallmark AL was sure to be successful. She called everyone "honeybun" and they started calling her the same. She loved that. Jim continued to visit her on Sundays, and added watching basketball and baseball to the mix of shared activities. Her granddaughters visited when they could, and Grandma was mesmerized by their presence. She loved Megan and Vanessa beyond measure. She was a wonderful grandmother and enjoyed visiting and spoiling them throughout the years. The love was reciprocated and equally shared, just as it should be.

The staff at The Hallmark, under the watchful eye of Deborah Davis, treated Edna with the utmost respect and patience, kindness and concern. They treated her as though she was a beloved member of their family. Heartfelt thanks to Team Honeybun: Veronica, Theresa O., Rebecca, Yeshi, Mina, Nini, Fancy, Daisy, Stephanie, Jenniffer, Sharmin, Alison, and Reina.


The family will have a Celebration of Life in New Jersey in the spring of 2023.